DECISION POINT: In a $1-2 game action folds to you in the MP2 seat and you open raise to $10 (5BBs is the standard opening raise size) with 8♠8♥. The Hijack and Cutoff fold, the Button calls, and both Blinds fold. The flop is 4♠K♣Q♣ and action is on you. What do you do here?

PRO ANSWER: In most $1-2 games the standard opening raise size is often much larger than 3BBs and in this particular game the standard raise size is to 5BBs. Action folds to us in Middle Position with pocket eights. We open to 5BB and we are called by only the Button. The flop is 4sKcQc.

One thing we want to keep in mind is that in these smaller stakes games, we should be using narrower opening hand ranges where we have to open to a larger amount to properly thin the field.

We are risking 5BBs to win 1.5BBs preflop instead of 3BBs to win 1.5BBs so we should be opening narrower. This is a common mistake players make in these smaller stakes games because they see opponents playing a high number of hands and are then tempted to play looser in response. We should be opening much tighter as the preflop opener by default, although many times we can call preflop a bit looser speculatively at these games in multiway pots.

From a theoretical perspective, the Button should be calling here with a much narrower range as well, although opponents will often call with a wider range than default in these small stakes games. In this particular spot we have third pair to the board and we are out of position. A reasonable opponent would be flatting in this spot with hands like middle pocket pairs plus a lot of bigger suited connectors, suited broadway hands and maybe the occasional AJo/KQo type hand. 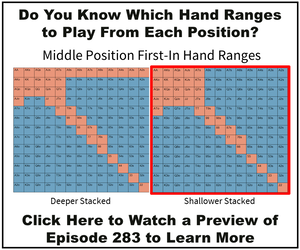 Against that particular range most of our opponent’s broadway hands hit this board in some way and the smaller pairs are unlikely to bluff often at this board. For this reason we should be able to realize our equity fairly easily against those hands. We are unlikely to get called by many worse hands and even those worse hands that may call have a lot of equity such as flush and straight draws with two over cards to our eights. We are also unlikely to get many better hands to fold.

Perhaps if we had specific opponent information that this player plays too tight postflop and would fold hands like AT or AJ, then there may be some merit to making a small continuation bet here. However, without that specific read this is a clear spot where we would like to get to a cheap showdown and realize our equity.

We do not want to build a bigger pot and play out of position with many turn and river run-outs that will make decisions very difficult for us.

TEST YOUR SKILLS!
PLAY 5 HANDS FROM THIS SCENARIO

In a Small Stakes Cash Game with 100 big blind stacks, you open raise from MP2 to 5BBs and the Button calls. 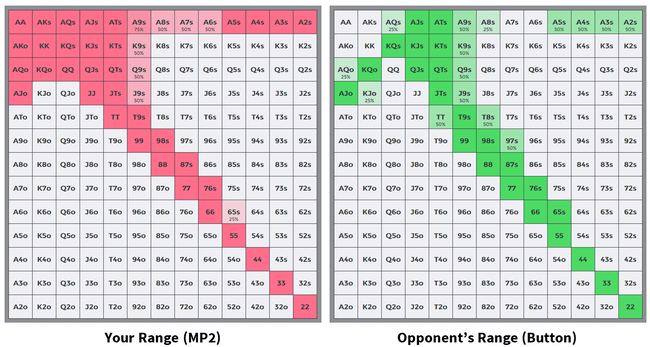 Play through 5 FREE solved hands similar to this poker hand scenario by clicking below and see how close you are to GTO play:

Hint: your goal is to get as close to 0 EV loss as possible!

LearnWPT Members train using Small Stakes scenarios like these on the WPT GTO Trainer to adjust their decisions and get closer and closer to GTO strategy.

Not a Member? Join now and start training for just $5 your first month of Membership. Play and practice scenarios like this anytime (and as often as you like) and start seeing true stats for YOUR play!