Decision Point: In a Tournament, it folds to you in the Hijack with A♣10♣ and you raise. The Cutoff and Button fold and the Blinds call. The Flop comes 10♦10♠6♠. The Small Blind bets and the Big Blind calls. Action is on you, what do you do here?

Pro Answer: In this hand we flop trips after raising preflop and getting called by both the Small Blind and Big Blind. The Small Blind leads out and the Big Blind calls. Should we slowplay our hand or raise on the flop? 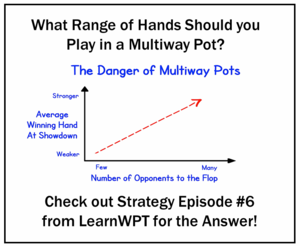 When considering whether or not to raise with a big hand on the flop, you should take into account the number of opponents, the board texture, stack sizes, your position and opponent hand ranges.

Many turn cards will scare hands that we would like to get further action from. Hands such as an overpair or trips with a lower kicker will often slow down on a spade turn. This significantly devalues slowplaying as an option.

In addition, with multiple opponents putting more chips into the pot on the flop, we are likely to get action from at least one player when we raise. Therefore raising will likely build us the biggest pot in the long run.

Also, given these stack sizes, we will likely need to put in a raise at some point to get entire stacks into the pot. This makes raising the flop a far more attractive option than simply calling.

Raising this flop for value is the best play.