DECISION POINT: In a live $1-2 Cash Game, MP1 limps and you raise from the Hijack seat with A♥J♦. The Small Blind and MP1 call. On the A♠8♥5♣ flop both players check and you C-bet. The Small Blind check-raises, MP1 folds, and action is on you. What do you do here?

PRO ANSWER: Let's talk about this spot from both a Game Theory Optimal (GTO) and Exploitative standpoint, because the conclusions can be very different.

GTO: The effective Stack to Pot Ratio (SPR) is too low to get away from top pair against Villain as a default play. If we folded hands as strong as top pair good kicker to a raise after c-betting with a flop SPR of only 2.5, Villain could easily exploit this tendency by raising our c-bets all the time.

We have to defend against this raise with an appropriate frequency that must include one pair hands. We simply won't have big hands often enough to combat this strategy otherwise, so we would be losing a ton of money in the long run if we fold to this raise.

As a default from a GTO standpoint, we should put Villain all-in. With so little behind we gain value by having Villain sometimes fold hands that might hit on the turn. If stacks were deeper (say $200 going to the flop), we should start to flat call the check-raise in position against a tough opponent. 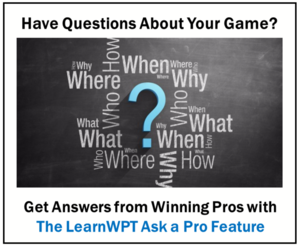 Exploitative: There are many Villains at small stakes such as $1-2 live cash that never check-raise with weaker than two pair. They simply don't have 67 or Ts9s or AT in their range when they make this raise, especially with a third player behind. Against that type of Villain, c-betting with a high frequency then folding to a check-raise is by far the most profitable line. Our opponent will check-raise us very rarely, but when they do we can simply fold our one pair hands.

The question is whether or not we have enough evidence that this opponent is tight enough with their check-raises to get away from this hand. The fact that this is a live $1-2 game isn't quite enough info to deviate this far from the default strategy. Even though there is a population tendency at these stakes that skews check-raising ranges towards value heavy hands, that tendency isn't strong enough to get away from this hand when Villain only has ~$100 going to a ~$40 flop.

Overall, we shouldn't fold in this spot as a default, but in the real world, there are many opponents whose range is tight enough to make this a fold.