DECISION POINT: You are seven handed in the early stages of a Tournament where blinds are 50/100. The Cutoff and Button limp and the Small Blind raises to 550. Action is on you in the Big Blind with A♥T♠, what do you do here?

PRO ANSWER: We are in the early stages of a tournament at 50/100 blinds with no ante and 7,595 chips after posting the big blind. No significant reads on the players at the table at this point. Action is folded to the Cutoff who open limps for 100. The Button also calls then the Small Blind raises to 550 chips. It is important to note that the Cutoff started with just over 4,000 chips and the Button has just over 2,200 chips to start the hand.

Often the easiest thing to evaluate preflop is if we should call. If we can profitably call then we know we should never fold, although we should still evaluate raising. If we cannot call then we need to either fold or raise. Since the Cutoff and Button both limped here preflop in later position, their ranges are quite wide but they also are likely to include many hands they want to “see a flop” with.

This makes it quite likely that one or both will call if we call. Since we would potentially be looking at playing a multiway pot out of position the speculative calling criteria applies when determining how we should proceed. The first thing to ask ourselves in that situation is if we have a speculative hand. Speculative hands are hands including pairs, suited connectors, suited one or two gappers, and suited aces that play well in multiway flops with reasonably deep stacks. Ace Ten offsuit is definitely not a speculative hand. Offsuit broadway cards play much better heads up as the preflop aggressor than in multiway pots out of position, so calling is not a good option here. 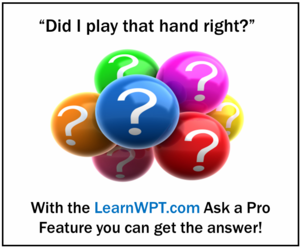 What about raising? First we need to determine what kind of range the Small Blind has in this spot. Often players make a mistake by overestimating the range the Small Blind has here. The Small Blind had the option of completing for just 50 chips, giving them 7:1 immediate odds on their call. They will be out of position postflop and there are no antes in play giving them additional incentive to steal. While it’s not completely out of the question the SB would steal in this spot, with the button only having roughly 2,200 chips it becomes much less likely since they are very close to pot committing themselves should the button move all in over their raise. All of these factors combined lead to the Small Blind likely only taking this line with a fairly narrow value range that likely includes just about every hand stronger than ours, but very few weaker than ours.

Many players are tempted to call in this spot as they feel their hand is “too good to fold” but doing so just results in playing a hand that performs very poorly out of position in a multi-way pot. Our hand is likely somewhere in the bottom of the Small Blind’s overall range which makes raising a poor option as well. By process of elimination if we cannot call and cannot raise, then we must fold.