PRO ANSWER: We are playing in a cash game with 100 big blind stacks and it folds to us in the Cutoff with AsTs. This is a smaller stakes cash game where the common opening raise size is 5 big blinds. We make it $10 (5bbs) and the Button reraises us to $30 (15bbs).

There are certainly smaller stakes games with players that will only reraise with ranges so narrow that we could make an exploitative fold here. However, without a specific read that our opponent is reraising very tightly we have to defend with ATs or we are simply folding too much of our range.

We make the call and the flop comes Td9c4d. As the preflop caller we are going to be checking to the preflop aggressor nearly 100% of the time. We do check, as does our opponent, and we are faced with an interesting spot. 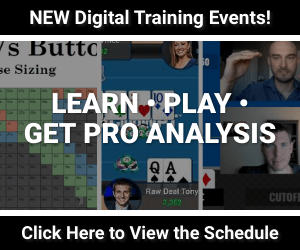 On this coordinated of a board our opponent would be heavily incentivized to make at least a small bet for protection here. Many of overpairs and stronger hands in our opponent's rage are really vulnerable to free turn cards, especially since our range often has more suited cards in it than theirs does. We block pocket tens which makes it less likely they’ve decided to slowplay a hand like TT in a tricky manner.

The turn is the 5c. At first glance this card seems dangerous for us since it adds a second flush draw. However if we break it down a little further many of Villain’s draws on the flop would have continuation bet, and even many of their backdoor club draws on the flop would bet here. This makes a large part of their range hands like AK/AQ, 9x hands, and 4x hands.

Due to those reasons, even though this board is quite draw heavy, we often have our opponent drawing to just a few outs when they’re behind.

Therefore even though many players would be very tempted to bet here, our hand actually plays a bit better as a bluff catcher out of position. If you do bet, including this hand as one of the hands that uses a large sizing of pot sized or bigger on the turn makes sense. Using a small bet sizing wouldn’t sufficiently deny equity to Villain’s range.

However, checking is the best play.