PRO ANSWER: Given that the MP2 player raised an Early Position limper preflop and continuation bet into 4 opponents on this Ace high board, their range is heavily skewed towards big Ax hands as well as a handful of KdQd type combos. Hands such as AK, AQ and AJ really dominate their range.

As a default play, we should raise now in this hand. They are unlikely to fold much of that range given remaining stacks relative to the pot, plus a diamond on the turn often hurts our ability to win additional chips against their one pair hands. 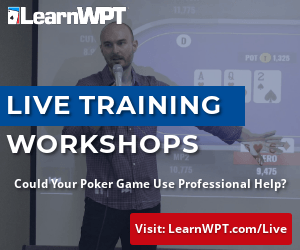 If this flop was seen heads-up, they could have many more bluffs in their c-betting range and we could often call this c-bet to allow them to fire again on the turn.

However, given how well defined their range is in this hand along with the fact that they aren't likely to fold much of that range, we can just get the chips in now and jam on the flop.

Improve Your Game With LearnWPT!

When you join LearnWPT for just $5 you'll get:

Everyone is improving their game, are YOU?
Join LearnWPT today and take your game to the next level!