PRO ANSWER: We are playing in the late stages of a tournament. There are 40 players left and 36 make the money. The blinds are 500/1,000 with a 100 chip ante. We are dealt black nines in the Small Blind. It folds to the Button who raises to 3,000 and action is on us.

To evaluate this hand properly we have to make a few assumptions. Since we are late in the tournament we should have some experience playing against the Button. At these blinds and these stack sizes the standard opening raise size is often something more in the 2,000-2,500 range. 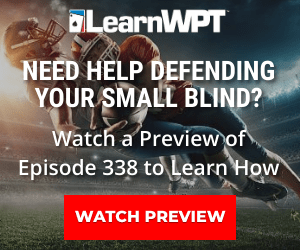 If our opponent is splitting their ranges usually raising to 2,000 and only very rarely to 3,000, then we could potentially make an exploitative fold here as their hand range would be much narrower than a standard Button opening range, especially from a ~20 BB starting stack.

However, assuming that 3,000 is the raise they use with their entire opening hand range or we don’t have evidence either way, pocket nines is simply too far ahead of all the hands they would open on the Button.

With four players left to the money (which is still 10% of the field) realistically playing snug until the money bursts will have us min-cashing quite often with a very short stack but rarely making a deep run in the tournament to the top 2-3 places and the bulk of the prize money. If we are focused on making the most money overall, we have to be willing to play this hand.

Our pocket nines are just too far ahead of a Button opening range here to do anything but move all-in.

The September 25th-27th LearnWPT Tournament Strategy Workshop is the perfect opportunity for dedicated poker students like YOU.

Learn strategy, receive personalized feedback on your play, and get answers to the nagging questions you’ve always had about poker. This your chance to experience a Live Event from the comfort of your home and upgrade your game over 3 Days.

Have Questions? Email our support team at [email protected] and we’ll be happy to help!

P.S. LearnWPT.com Members receive Preferred Pricing of up to $600 off on this Workshop! Not a Member? Click here for information on our Membership Tiers.