Top Pair on the River vs an All-in, what do you do?

DECISION POINT: In a Tournament, you hold K♠Q♠ on the Button and are facing a river shove from an Under the Gun player after flopping top pair in a multi-way pot and calling 2 streets on a Q♦5♠7♣T♦2♠ Board. Action is on you, what do you do here?

PRO ANSWER: Against a tough opponent capable of three barrel bluffing, we should call this all-in.

The issue with calling two streets and folding on the river is that we are near the top of our range.

If we are calling flop and turn then folding everything but two pair or better, we are folding far too frequently on the river. That means an opponent can bluff us too often postflop on later streets. 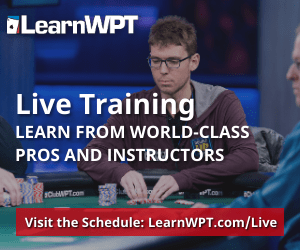 As played we should call with this hand on the river against a tough opponent. We beat a variety of bluffs including any two diamonds, KJ, AK, even 98s or J9s.

Against a weaker/passive opponent, folding the turn is likely the best play. However, we shouldn't fold to an opponent capable of triple barrel bluffing.

Ever Wonder How Some Players Win So Often?
(hint.... watch this video!)

Ready for better results at the table?
Join LearnWPT.com today for $5!